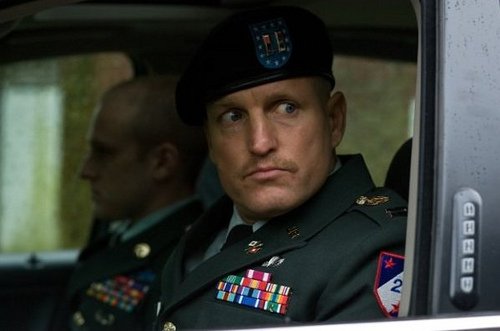 NPR did an interview with Woody Harrelson in anticipation of the release of “The Messenger”, a movie about soldiers assigned to inform designated Next of Kin that their loved ones have been killed in Iraq or Afghanistan.

Here were a couple of highlights that stuck out for me:

And yeah, he asked me to shave my head. So, yeah, I did that. And, I mean, just
did the most – in reading a book, Tim O’Briens The Things They Carry, really helped. And, you know,
there were a lot of things, but nothing really helped as much as just spending time with the soldiers. I
felt like that really helped me humanize them in such a way that I felt like, oh, you know, they’re not
that much different from me, you know.

Harrelson describes the most important part of his preparation as the part that forged a bond of identification between him and the people he was to portray.

But certainly, I remember standing back offstage, waiting for that red light to go on and, you know, I
could hear the dialogue and I could tell I was getting closer. And then, boom, the red light goes on
and I’m entering into the bar, in front of a live audience, and obviously a show thats going to be seen
by a lot of people. So it was pretty I was nervous, I got to say. But thankfully, you know, I’d done
enough theater in college that I think it really helped me get through that.

Harrelson credits his experience acting in theater as preparing him for the high stress of making his first entrance on a popular national TV show.