Many people whom I have told the name of the theater company I am forming have chuckled upon hearing it, and, after a moment, exclaimed “I like it!” But I think the reason for this name, what I am gesturing at with it, is not immediately obvious. I don’t think that’s a bad thing, I like a good enigma as much as the next guy and probably more. I have produced a lyrical explanation in the company Mission Statement, and the 9 Muses page on the website I think also does an excellent job of invoking the intended esprit de corps of the thing, but I thought that some of you around me who have been so supportive and encouraging might be curious to hear a bit more about where I am coming from with this name, and, perhaps more importantly, where I am going.

I recently completed a dissertation on the Austrian novelist and playwright Thomas Bernhard. Bernhard is now widely considered the premier writer in German of the postwar era. It’s hard to describe him; for a sample, see #2 on the 9 Muses page of the Uranium Madhouse website. His novels consist of long monologues (no paragraphs!), and the narrators rant, relentlessly, at length, about all manner of subjects, from Heidegger to the pissiors of Vienna. They ruthlessly take apart people in their acquaintance, only to take themselves apart with greater ruthlessness shortly thereafter. They resist the use of pronouns, so that as they hold forth on some subject, they will have to repeat certain terms over and over and over again, making them seem as verbally clumsy as they are obsessively fixated. What fascinated me about Bernhard was the effect this seemed to induce: if it wasn’t outright laughter (and it often was; I have laughed to tears more than once reading Bernhard), then it was what I can only describe as a certain kind of loopiness or trippiness, a sense of unreality.

In thinking about Bernhard and studying him, I came across a place in his writing where one of his most famous figures describes the world as “a completely, totally carnivalistic system.” The writer W.G. Sebald, in an essay on Bernhard, uses this utterance to invoke the work of a thinker named Bakhtin, who had written an important book on the concept of the carnival, the role in played in the consciousness of medieval Europe: a period when the rigidities of the social order were suspended, and nothing was sacred. I recognized this as what fascinated me about Bernhard: that he saw both human society and the human mind as carnivals, places where their own procedures and practices were subject to reversal and parody at any moment.

Ironically enough, around the same time, I had begun to perform in the night club world of San Francisco, including at the legendary Trannyshack. I had created the persona of Johnny Cocksville, based on this photograph of Johnny Knoxville from the cover of Rolling Stone: 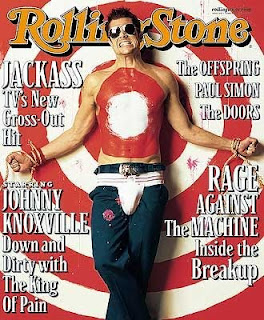 The picture inspired me to create a kind of hypermasculine, hypersexual gay superhero: 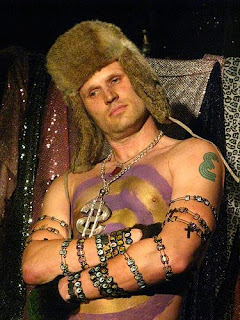 I performed little vignettes, lipsynchs at bottom, that were structured like vaudeville pieces that told a story of sexual conquest or of abject failure in the sexual realm. I reveled in the carnivalistic dress-up world of the San Francisco drag scene.

At some point, I recognized that the loopiness and absurdity that I appreciated in Bernhard and in the world of Trannyshack were related to each other, as different as they seemed. And really, they couldn’t have seemed more different: the asexual, Mandarin Austrian and the punk-juiced dragsters of San Francisco. But in simultaneously mirroring and parodying norms of the world around them and of their own internal worlds, they were engaged in something remarkably similar.

At the same time, in thinking back on past theater projects and also to ones I had a hankering to do, I found that this trippiness or loopiness was a common thread through much of what I had done and what I set out to do. Case in point: Hamlet. The whole middle of the play, when Hamlet is feigning madness, is suffused with a sense that since he has left the norms of behavior behind, he could do…anything. Another case in point: The Ride Across Lake Constance, the play I did as my thesis at the Yale School of Drama. Written by another Austrian, Peter Handke, this play depicts the struggle of a group of silent film stars who find themselves in some sort of hotel lobby, not at all sure who they are or what they are supposed to be doing. Their struggles to have exchanges that feel “normal” or “connected” are by turns comedic and painful. Another case in point: The Duchess of Malfi, in which a man becomes so incensed with the thought of his sister’s involvement with her servant that he locks her up with madmen, has her killed, and then comes to believe he has become a wolf.

Meanwhile, in 2008, I awoke fully to the political realm, which I had had a fairly dim awareness of previously. After I came to know the full-blown dementia evinced by Sarah Palin, I immersed myself in politics and the Presidential campaign. (I even performed as Johnny Cocksville with the Obama logo painted on me where the target usually was. ) As I did so, I became more aware of what had unfolded in the last eight years, and the madness which seemed to have gripped the country in the wake of the fall of the Twin Towers. And I noticed what a big role uranium had played in all of that. Lying about Saddam Hussein trying to enrich uranium had been an important part of mobilizing the nation for the Iraq war, and the worry about a nuclear Iran and North Korea seemed to be bearing down just as hard.

The notion of radioactivity resonated in another way with me: I had studied acting with some truly remarkable teachers at Yale, and had come to see the actor as a generator of “heat”, and I don’t even really mean the quote marks. An actor who was working from a visceral place seemed to radiate, in a way that compelled our attention from deep within our cores. This phenomenon was so important to me that I would eventually found an acting school, so that I could put the process of helping actors to radiate in this fashion at the center of my work, and develop my skill at doing so.

Also around this time, I read a great book by Adam Phillips called Going Sane, in which he attempts to think about the relatively bland role that the notion of sanity plays in our set of concepts compared to the one played by its opposite.

Lastly, I had long had a sense that in starting a theater company, I wanted to think of it as starting a rock band. Growing up gay (and really afraid of what that meant) and studious, I have long felt that I missed out on the kind of carefree adolescence that many had, or at least that popular culture seemed to suggest many had. In the music of Blink-182 (also to be found on the 9 Muses page, in a video in which they band members run naked through the streets of San Diego), I discovered in my late 20’s this spirit of irrepressible insouciance and even omnipotence that bordered on the insane, that I felt I had missed out on. So when I started to think about what my company would be called, I thought of it a little like coming up with a band name. Something like the Flaming Lips, or Vampire Weekend, or Okkervil River, or the Dandy Warhols, or…

And then, in a moment of epiphany, it all seemed to come together in the phrase Uranium Madhouse: the radiation, the danger, the insanity, the vitality. It had to be. It was what I wanted to do with the second half of my life. To create a context and an artistic family which would celebrate all of this, and invite the society in which we live to join in our revels.