why The Kids Are All Right was not all right 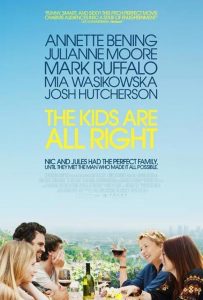 First of all, I’ll say that there was some genuinely funny stuff in this movie. Also, I love the way the director, Lisa Cholodenko, loves LA. She gets it.

But the movie is disappointing in more than a few ways. The decisive flaw, from the point of view of the acting, is the work of the two leads, Annette Benning and Julianne Moore. Neither actor is a favorite of mine, and they did nothing to change my opinion of them here.

The biggest failing in their work was they did not create a convincing relationship with a palpable history. I just could not accept that these two people had been together for twenty years. What would I like to have seen that was different? It is difficult to write about (easier to point out in a classroom!), but it has to do with what the two actors look for when they look at each other and interact with each other. The most persuasive way that an actor can successfully make you believe that there is such a history to a relationship is that they are always looking to the other person to manifest the essence of the relationship, the sense of fit, match, connection, the thing that convinced them both that they belonged together. Even expressions of disappointment and bitterness, in a real relationship, are infused with the person in question asking for, calling for, invoking, the successful relationship that was. It is this looking for that something in the other that persuades us, immediately and viscerally, that the relationship has a history.

One of the best articulations of this that I have come across is from a critic named Percy Lubbock. In an essay on what Henry James learned from his unsuccessful forays into playwriting, Lubbock writes:

“The actors are not there only to illustrate for us the facts of the story, but through their make-believe to create an imagined world for the eye of the mind to dwell upon. Good dramatic writing, like good acting, owes much of its quality to the establishment of these imagined perspectives behind and beyond the little figures on the boards.”

These “imagined perspectives behind and beyond” the actors/characters in the film are what Moore and Benning totally failed to provide. As the film progressed, and the relationship entered a crisis, I got hints of how Benning’s character had a sense of having a claim on Moore’s character, a sense of ownership, based on being together for so long, but this is not the same as the sense of what it was like when it worked, and is something significantly less compelling than that.

In other words, in any relationship in a scene, the most urgent question to pose is: what made us us? What were the defining moments, when we became a “we”? The moments of connection and communion? The moments of crisis that were resolved in a satisfying way that brought us even closer together? What about our experience together makes this “we” worth fighting for? It’s this sense of “stuff happened to us and made us us” that gives a relationship between two actors its unmistakable reality.

These questions went totally unasked in this film, apparently. And it shows.

I am sure my writer friends would have more than a little to object to about the way the story unfolded. For one thing, the Moore-Ruffalo liaison seemed kind of arbitrary and forced, like it was there just to precipitate a crisis in the Benning-Moore relationship.

But here is one thing about the movie that I have absolutely no objections to. Nope, none at all. More of that, please.