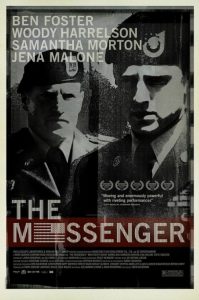 I really, really wanted to like this movie. I hate feeling so disconnected from the wars this country is engaged in. I went to the movie ready to be kicked in the stomach and take it, and feel some of the pain that the people who have been robbed of their loved ones by our foreign interventions. For a while, it seemed like I was well on track to experience just that. The first third of the movie is tightly focused on the initiation of Ben Foster’s character into the practice of informing families that their loved one has been killed. The able Woody Harrelson is his Virgil, guiding him through the perils and pitfalls of this series of emotional minefields, where the soldier delivering the message is confronted with his own impotence to do anything in the face of the wrenching, profound loss the recipients of the bad news experience before his eyes.

But by halfway through, it becomes clear that the director does not know where to take the story. In the end it seems the story was supposed to be about the bond between these two men, but by the time we get there, there have been several digressions and false starts, and waters have been substantially muddied. The catharses intended in the final scenes disappoint, in a word. Ben Foster may well win an Oscar for his work in this, although not because the acting is extraordinary, but because he did a serviceable job on a role that cannot but elicit enormous sympathy, given the type it embodies: the troubled soldier, hounded by wartime loss and perceived failure.

But what is even more disappointing than the movie itself is the apparent lack of hunger for narratives like this one. We have been at war for almost a decade now, and inside Fortress America we are largely shielded from the horrors and costs of these episodes. This movie opened two weeks ago, and is playing in only one cinema in San Francisco, and even then there are only two showings a day, sharing a theater with Boondock Saints II. The theater was about three-quarters full at a 7:30 showing on Saturday night. People are busy with Black Friday and Twilight and Ninja Assasin, I guess. Perhaps the buzz on the movie is not good enough, but the reviews have largely been kind to it. I feel a bit of frustration that the moviegoing public does not seem to feel any urgency about engaging with these issues, even as President Obama weighs what the course will be in Afghanistan. Flawed as it was, this movie should have a greater audience. Time for the citizens of this country to step up.