the actor and the duck-rabbit

Look at this image. Is it a duck or a rabbit? 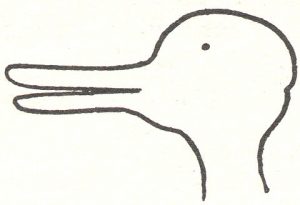 Actually, you can see it as either a duck or a rabbit. Now try to see it as both a duck AND a rabbit at the same time. It’s not possible.

The way we learn to take in stories as children is as readers or spectators. We watch attentively as the action unfolds, we make predictions about what will happen, and we make judgments about the cleverness, wisdom, and goodness of the characters involved. Our relationship to the work is of one who stands outside it and observes, and then makes judgments.

When we approach scripts, this habitual way of looking at texts usually stays with us, and so even as we approach a role that we are going to play, we are often standing on the outside, looking in. We bring out judgments about the character we are representing along with us, usually unconsciously. These judgments often have the effect of distancing us from the role we are to play, and thus holding us back from fully abandoning ourselves to the cares and pursuits of the figure in question.

Approaching a text to be performed is fundamentally about learning to look at that text in an altogether different way than we do when we are occupying the spectator’s position that we learned to occupy as children, when we were told stories. In order to promote the greatest possible identification with the role, we must begin to see the world not as an Olympian observer, immune to the reversals of fortune that the character experiences, but through the eyes of the character herself. There is more to this than meets the eye.

Students are often called upon, in my class, to recount their portions of their histories as the character, including the facts presented by the writer in the text and embellishments that the actor has seen fit to add. Students who assume that because they have read the play and “know what happens”, they will be able to think on their feet and spontaneously transpose their knowledge of the story into the kind of first-person narration I have described above without thinking this transposition through in advance often learn the difficulty of making this change in the way they look at the text the hard way: they find they are unable to supply facts which should clearly be at their fingertips, if they had really taken the trouble to look at the experience presented by the writer from the eyes of the character, rather than from the comfortable position of the spectator.

There is more to making this switch than I have described here: there is the central criteria of finding a way to make sense of the past of the character (or “Who-Am-I” as we call it) that generates the most possible “heat” or urgency. There is a lot to that process, which is usually dispensed with by what are supposed to be magic words: “raise the stakes”, which actors everywhere tend to understand as an injunction to “act harder”, rather than as a call to carefully reexamine the way they have viewed their circumstances and consider whether there are changes they could make to this view that would make their point of entry into the scene “hotter” or more compelling.

It’s much easier to see the duck as a rabbit or vice-versa than it is to make the change from approaching a text as a spectator to approaching it as an impassioned, engaged participant. To make this change, the ways of looking at many things, from people to situations to relationships to language to movement, need to be recalibrated. Our way of looking at a script actually entails ways of looking at many other things. Making this change is more like completely rearranging your living room than it is like turning your car to the right. But once you have achieved this new way of looking, you can make strides in approaching texts and roles with infinitely greater speed and insight.