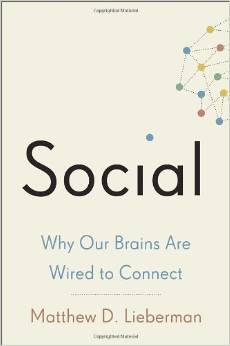 I finally finished reading Matthew Lieberman’s extraordinary book Social: Why Our Brains Are Wired To Connect. I have written about it a few times already, namely here and here. The book makes use of brain science research, which has advanced in sophistication very quickly in the last few decades thanks to major technological advancements. (NYU, the alma mater of Michael C Hall and of the late Phillip Seymour Hoffman, has recognized the importance of brain science for acting by collaborating with leading neuroscientist Joseph LeDoux, as the Hollywood Reporter recently reported.) Lieberman uses these findings to demonstrate that the most fundamental human drive is social in nature. It is a drive for connection with others and meaningful relationships of all kinds. This insight has been an emerging consensus in psychology for some time now, but neuroscience has caught up, and Lieberman relates study after study supporting this view.

It’s an absolutely fascinating work, and should be required reading for anyone seriously interested in understanding human motivation. But I wanted to discuss something that comes up near the end of the book. Lieberman describes a study that showed that subjects in an experiment who had been given a task to do regularly that challenged their visual-motor self-control, that is, their ability to respond quickly and accurately to signals and to immediately STOP responding when instructed (think of a game of Simon Says on a computer), showed greater ability to regulate their emotions than those in a control group, who were given no such task.

This finding is extremely important because, as Lieberman explains elsewhere, success in almost every endeavor depends to some extent on the ability to regulate the emotions. Now, acting is not about regulating emotions, exactly, but a trained or experience actor has acquired an instinct about what kinds of impulses within herself to respond to and what kinds to ignore or inhibit. And this process is something akin to emotional regulation. So these findings are relevant.

One part of their relevance points to the importance of physical training for actors. While that’s not the kind of training I offer in my classes, mostly, I do emphasize the importance of some kind of movement training for actors. I regularly bring teachers of the Alexander technique to class to introduce what they do: helping the mind and the body to harmoniously interact. I teach an exercise that my students have dubbed “eyeball-to-eyeball” that entails reading the lines of a scene aloud but only speaking when you have eye-contact with the partner. This means you have to stop speaking BEFORE looking down to get the next line, and, having looked down and gotten a line, you have to refrain from starting to speak before re-establishing eye-contact with your partner. Harder than it sounds, and most definitely an exercise in visual-motor self-control.

I also often remark to my students that acting is more a feat of coordination than they typically expect. We must engage our voice and body to affect our partners, but we must also be receptive. We have to alternate between these two modes, in the way that our exhale alternates with our inhale. We must continually open our senses to find the prompt for speaking in the messages emanating from the partner, but we must commit fully to sending messages in response. Our physical self, specifically, both core (abdominals) and extremities (jaw, arms/hands, legs/feet) have to engage in what we are doing. We have to leverage the strength and stability in our cores, even in our most delicate moments, and the extremities have to support and direct the energy generated there appropriately.

Vulnerability and emotional truth arise as a by-product of this integration of the parts. Out of the cacophony of noise that mind and body continually generate, the trained actor knows how to pluck out the sounds that will allow him to make music with the script and with his fellow actors.