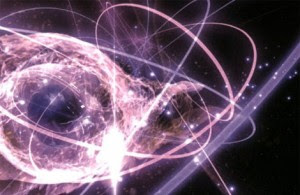 The expression “quantum leap” is kind of tricky to use correctly. As one physicist explains:

Some people think that a quantum leap is a particularly large leap. This is incorrect. In fact, in quantum physics, where the expression came from, a quantum leap is usually a very tiny leap indeed, often smaller than the diameter of the nucleus of an atom.

In defense of the people who are using the term incorrectly: if I recall correctly, quantum leaps can produce radiation, so while the leaps themselves may be very small, the results of said leaps can be significant, to say the least.

So what does all of this have to do with acting?

There are certain types of behavioral tics that crop up again and again when people are acting that, once they are addressed, can unleash enormous acting power. It’s as if the actor has everything in place, internally, but some part of her is using the tic in question to hold back and remove herself from the fray, to stay safe. Once that little bit of interference is removed, the actor’s work catches on fire, becomes radioactive, in a good way.

So what are some of these tics?

LOOKING AWAY BEFORE STARTING TO SPEAK:When I see an actor CONSISTENTLY look away from his partner before starting to speak, I always take notice. The actor is not looking at anything in particular, but is simply looking to the side or down, into space, for a moment, before starting to speak. Then, as soon as he starts to speak, he makes eye contact with the partner. Why is he looking away? It would seem he is formulating his response to what he has heard, find the right words, or something of the sort. We do this in real life. However, when an actor does it CONSTANTLY, every time he speaks, or more than half the time, this is a sign that the looking away is not arising from the situation he is attempting to inhabit, but is rather a response to being an actor in front of an audience, and the anxiety that goes along with that. Often, the actor will be using that disengagement to recall the next line, and will also use it to “compose” himself before speaking. As such, this looking away is a bid for control, an unwillingness to allow the impulse to arise from the connection with the other actor, but rather to reserve the right to shape or control the utterance he is about to undertake. Eye contact is intimate, and is therefore scary. Invariably, when I call an actor’s attention to this and INSIST that he make eye contact with the partner upon starting to speak (this usually takes a little work, first to make the actor aware of what he is doing with his eyes, and then to get him to stop doing it), there is a DRAMATIC flowering in the actor’s work. And to be clear: the goal is not “eye lock”, which occurs when an actor maintains eye contact with the partner only because she is directed to, but to inhibit HABITUAL looking away before starting to speak.

SMILING:Again, smiling is part of our repertoire for expression as human beings, a regular part. However, an actor who is smiling more often in a scene than she isn’t smiling is simply holding tension in her lips, probably out of anxiety. This will dramatically affect her ability to “throw the ball”, that is, to use her words to impact her partner, to place pressure on him. She will be effectively pulling her punches. When I see this, I ask her not to smile, and again, the results are often remarkable. Suddenly she is no longer fighting herself in her verbal expression, and she starts to really get her words out into space and into her partner.

STANDING OFF CENTER:When I see an actor standing with their weight over one leg or the other, rather that equally distributed over the two legs, I will ask him to stand over his center, by which I mean the abdominal core of the body, the Pilates core, if you will. When the weight is entirely over one leg or the other, the core muscles are “off the hook”: they do not need to be engaged to hold the body upright. When the actor’s weight is equally distributed over the two legs, the core has to engage to help maintain balance between the two. And when the core is engaged, the chances that the actor is doing something interesting increase exponentially. But what if it’s a character choice to stand with the hip popped and the weight over one leg, like Fonzee? Well, let’s just say that that is like a handicap in golf: the actor is making her life more difficult. Not that it can’t be done, but it is harder, because the actor is choosing a way of standing that actually undermines the engagement of the all-important abdominal core. So it’s a kind of advanced challenge. The actor first needs to learn what it is to engage with his core in a scene, to use it to put his words out and also to receive with it from his partner and from his environment. Once he has mastered that, he can start working at adopting alternate physical attitudes WHILE engaging from the core. But as always, first things first.

These are just a few examples of the kinds of tics that can undermine actors’ efforts to engage fully in a scene. It never ceases to amaze me the difference addressing them can make. We get to see an actor catch fire, in a good way.