On Talk of the Nation on NPR yesterday, they were remembering the Civil Rights activist and leader Dr. Dorothy Height, who passed away in the last few days.

She was quite a lady: 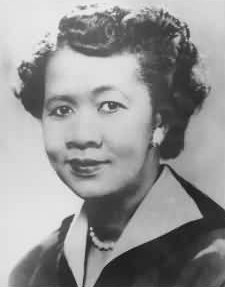 In 1963, as Martin Luther King, Jr. told the March on Washington, I have a dream, only one woman stood on the platform behind him: Dorothy Height. A lifelong champion of civil rights, she organized a meeting the next day where women in the movement could address racism and sexism. Dorothy Height died earlier today at the age of 98. She was born in Richmond, Virginia, grew up near Pittsburg, won a scholarship to Barnard College in New York only to find the school had already admitted its quota of two blacks.

In the 1940s, she lobbied First Lady Eleanor Roosevelt on behalf of civil rights, had the ear of presidents from Eisenhower to Obama, who described her in a statement today as the godmother of the civil rights movement. She played leading roles in both the YWCA and the National Council of Negro Women

One of the guests talking about her was Blanche Williams, founder of the National Black Women’s Town Hall Incorporated. Ms. Williams told the following story about Dr. Height:

And I remember when I was about to go out and we had done it at the historical headquarters in D.C., I said, you know, Dr. Height, I’m really nervous, you know. I’ve got some butterflies, because, you know, C-SPAN was covering it. We had this, you know, sold-out – you know, sold-out event and so forth. And it was just – I was a little nervous. And, you know, I’m a speaker. I’m a talk show host, all these things. But it was for Dr. Height, you know. So she said, Blanche, I want you to remember something and then, you know, very, very calmly – and she just had this very profound way of saying things. And she said: All you need to do is organize your butterflies.

I know that many actors struggle with performance anxiety, so I thought it would be good to pass on this sentiment. What a great image of transforming fear into fortitude!

Dr. Height’s use of the word “organize” is interesting, also, because in the Alexander technique the concept of using the body in an organized way is constantly invoked.

We have lost a visionary and a courageous leader. Thank you for everything Dr. Height!