lessons in acting from an unlikely source 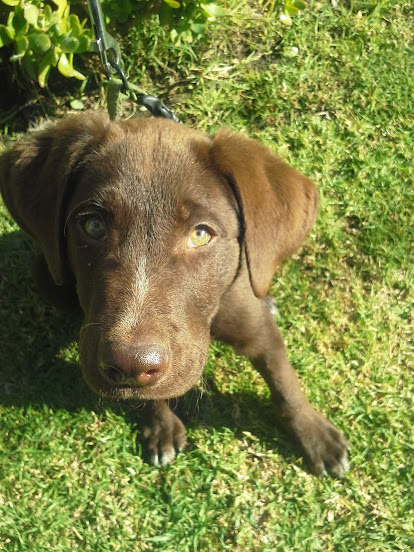 I spoke to my accountant not too long ago, and I asked her, jokingly, if expenses incurred in acquiring and caring for a dog could be written off in my case, as I am a trainer of actors, and I was curious to know what lessons training a dog might yield for me in what I do. As I said, I was joking, as people and dogs obviously have to be approached quite differently, and tasks involved are not at all comparable, and yet I felt in my bones, that insofar as training entailed communication, there would be some real resonances. And I am happy to report I have already discovered one.

Various authorities on teaching dogs to follow instructions will caution against repeating instructions. The owner will put forth their best assertive “Sit!”, and when the dog does not immediately comply, the owner will likely feel a strong impulse to repeat the command, and likely at progressively louder volumes: “Sit! Sit! SIT!” If Cesar Millan, the “Dog Whisperer” is right, dogs respond to what he calls “calm-assertive energy.” So repeating the command with mounting frustration at louder and louder volumes is likely to have no result. I very quickly found this to be true in my case. I would tell Hudson to sit, a command I knew he knew, and when he didn’t immediately oblige me, I found myself under a powerful pressure to repeat the command, a pressure to which I yielded, expressing a good deal of exasperation in the process, but to no effect.

I remembered what I had read about repeating instructions. I was a little unclear about how not repeating them was going to work, if the dog ignored the first command, but I knew that I wanted to avoid the public spectacle of repeatedly enjoining my dog to do something to no avail, so I resolved that no matter what, I would not repeat instructions, at least not without a substantial pause. The next time I wanted Hudson to sit, I issued the command…and as was often the case, he ignored it. Or so it seemed. Because at this point, my acting teacher spidey-sense took over, so even though I had completed issuing the command verbally, something told me to keep issuing it non-verbally. What did that mean? It meant that in the silence following the command, I continued to project my intention that Hudson sit by paying visible attention, with body, gaze, and manifest intention, to whether or not Hudson would sit…and after a moment, he complied! Success!

Now, obviously, it would be better if he complied right away, but Rome wasn’t built in a day, he is a puppy, and there were some significant distractions happening. SO I counted it as a victory. And the key to the victory was that it was important to Hudson to know that I was watching what he would do in response to the command. To use the parlance of my class, I was receiving. Receiving means paying close attention to how a particular prompting you have issued is responded to by your partner. In this case, I was making the choice to issue the command, and then direct my attention physically, again using the orientation of my body and my gaze, to how the command was going to be dealt with by my partner, the puppy. I realized that when I had been merely repeating the command, I had been paying more attention to my own disappointment and frustration than to the puppy’s next action. Further, I was omitting an extremely important part of issuing the directive: communicating to the recipient that I care about how he is going to respond. In fact, the receiving is a part of what we call the sending, or the issuing of a prompt, whether it be a command, a request, a plea, a confession, or whatever. The receiving and the sending interpenetrate each other.

To help people experientially grasp what sending and receiving is and how it works with language, I often do an exercise where I have scene partners throw a ball back and forth as they say their lines, but they have to throw the ball on the last word of each sentence. It has to be at the precise moment that they speak the last word, not on some operative word in the sentence, not after they finish speaking the sentence, but on the last word. But what is often telling is what happens in the instant after the ball leaves the actor’s hands. In many cases, the actor will pull their hands back towards their torso: the effort to throw the ball has left them extended and exposed, and so they have an instinct to protect themselves and draw their arms back towards themselves. But acting is about vulnerability and exposure, not about protecting ourselves. So pulling back the arms is the wrong thing to do. But it’s also wrong from the point of view of throwing the ball: I can remember coaches and my father teaching me as a kid that when I throw, I should always follow through. It seemed kind of pointless at the time: the ball had left my hand, what difference did it make what my arms did at that point? But the point was that the follow through insured that I wasn’t anticipating the ball leaving my hand, and starting to reduce my exertion to throw it before it actually did leave my hand. The follow-through maximized commitment. In the language of the class, following through meant playing to win. And here’s the thing: following through also promotes true receiving. Because when we receive, we must be receiving with our vulnerability, with our need, with our core need for belonging, not from a vantage point of safety and aloofness. When we follow through, we are extended, exposed, vulnerable. Which, as actors, is where we want to be.

What I had learned with Hudson was that part of issuing the prompt, in this case a command, was following through, receiving: Hudson needed to know that I was watching what he did before he responded. When we engage and assert ourselves in a scene by asking for what we need from our partner in the scene, an integral part of doing that asking is paying attention to what the response will be. Of course, we should care about the response because we are invested in a visceral need that we are attempting to meet with the partner, but that isn’t always happening when people are just learning to act. We have to start somewhere. Fake it till you make it, right? If an actor hasn’t yet learned to stand in that visceral need, she can at least act as if she cared about how her partner responds to what she is offering. If she does that often enough, that openness may coax her own need for belonging to come out and play, and will likely have a salutary effect on her partner as well: nothing shuts an actor down faster than the awareness that the other person isn’t listening to them.

So stop, look and listen, after you speak your next line. You’ll find there’s a whole world waiting to be discovered.