in praise of keeping it light

I was reading a blog posts at Theatre Ideas and I came across the following bracing piece of honesty and wisdom, which the blogger quoted from an article by Barbara Carlisle and Randy Ward, two professors at Virginia Tech in an article entitled “Writing for Ralph: An Exploration in the Dramaturgy of a Sustainable Theatre,” which was published in Theatre Topics in 1999. 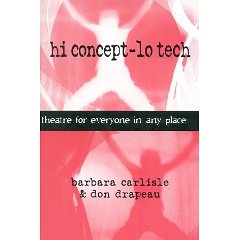 Since at least 1990, the authors of this article–director and playwright Barbara Carlisle, with scenographer and lighting designer Randy Ward–have been participating in a common theatre problem at Virginia Tech. As a department we pride ourselves in maintaining high standards of execution to provide valid design and technical learning for our students. At the same time we confront increasing materials costs with fixed budgets, intense pressure to meet overlapping production deadlines, and perhaps more importantly, deep discomfort with the unrecycled waste that has gone out the door after each production. In every respect we have balked at the model we were perpetuating for our students–debilitating burnout, financial anxiety, and production panic. In writing the book Hi Concept – Lo Tech*, Barbara and her co-author Don Drapeau (also of Virginia Tech) coined the expression “sustainable theatre” to refer to the need for a mode of theatre making that does not deplete the resources of the theatre makers (174). Yet our theatre at Virginia Tech was not sustainable. We were working off the backs of exhausted students and staff, caught up in a theatre mythology that presumes “if you’re not willing to kill yourself for the art, you better get out.”

As a young theater artist, I considered myself willing to kill myself for the art. Directing in college and graduate school, this was possible: those were both relatively forgiving environments in which to neglect everything else in your life to get the product you wanted. In between those two periods of study, I was living in Berlin, Germany. I had gone there with some money from my undergrad school to do an internship with a theater company, but had stayed on well after that money was gone. I worked as an English teacher, worked on my German, and got to see a lot of exciting theater. However, I eventually decided I wanted to produce and direct my own production of Maria Irene Fornes’ play Mud there. I raised a little money and went to work.

I had no idea what the cost would be. As I pushed and grunted and sweated to make the things happen I believed needed to happen for the production to be what I believed it needed to be, my relationships began to fray: with the actors, with the design/production team I had recruited, with my roommates, with my employers. We presented the play both at the Amerika Haus and at a private theater in Berlin, and the set involved a sever rake and a curving cyclorama. It was, in a word, a bitch. And in getting the show up, I took my eye off the ball of promoting the show. The Amerika Haus presentations were well attended, but at the private theater we played to many a sparsely-populated house (the show impressed one of the members of the Berlin Culture Senate enough that she offered to try to help me get money to start a company in Berlin; this was the silver lining). But all things considered, it was a wrenching series of crises and heartbreaks. By the end of the process, my bowels were upset and didn’t recover for about a month.

I then was fortunate enough to enter graduate school, which was a more forgiving environment, although it came with its own set of aggravations. I had my triumphs there as well as my disappointments. My last show in school was my thesis production. I had chosen a difficult Austrian play with nothing in the way of a discernible story in the text, that depended on virtuosic performances to give the audience anything to hold onto at all. If it had worked, it might have been something really unique: an experience of being both oriented and disoriented at once. But we didn’t get there, and I left graduate school with the monkey on my back of having felt that my thesis production was not a success.

I had spent ten years, between undergraduate school, where I studied with incomparable directing teacher and Yale MFA Jody McAuliffe, to Berlin, where I saw some of the best that European state theater has to offer, to three years at the Drama School at Yale, developing these incredibly high standards for what I wanted my work to be like. When I finally left graduate school and started hustling for work in New York, it wasn’t an easy adjustment to make. First of all, I had to make money, which meant long, boring, demoralizing days temping at Goldman Sachs or working as a cater-waiter. When I did get opportunities, it was always a project that someone else had picked. They had also set up the timetable and severely limited the budget. The talent I was able to access was also pretty circumscribed. Little or no rehearsal support, etc. Crises would erupt during the day that I would have to try to handle on the phone at my temp job. I would have to try to make things happen by pulling strings in a bureaucratic setting I did not understand. And I brought my share of neurosis to the mix, which certainly didn’t help matters.

After a while, it wore me down. I was able to make happen little or nothing of what I dreamed of, and at such a cost! I eventually turned my back on the theater and jumped on the web development bandwagon. Having given my first thirty years of life to the theater, it was time to take care of myself.

Skipping forward a few chapters, I moved to the west coast and entered a Ph.D. program at Stanford. After a year there, I had a brainstorm and launched an acting studio in San Francisco, now the Andrew Wood Acting Studio. I was determined to start small: the first time I taught the class, I taught it for free (I had my Stanford fellowship to live off of). The class had some pretty strict requirements in terms of attendance and preparation, so the students were contributing, even if they weren’t paying cash money. It worked, and I found that it afforded me the pleasure of working with actors and text, which is what it was always all about for me, without the aggravations of trying to make art in a foreign institutional matrix, whether regional theater, university, or downtown theater. I had the autonomy of being my own boss, and I didn’t have the pressure of opening a show. I did institute a Friends and Family night at the end of each cycle, and I found that that was an invaluable practice, since it helped keep me honest with myself about what I was accomplishing with the students. It’s hard to kid yourself about your work when there are strangers in the room watching it.

I have been teaching my acting classes for five years now, and expanded to Los Angeles a little over a year ago. It has proved a solid foundation for me. It afforded me the opportunity to continue to grow as an artist, it has provided me with a (modest) income, and it has given me the pleasure and satisfaction of doing what I love to do and do well.

I turn 40 in March, and recently completed my doctoral program in Stanford in German literature. I don’t plan to look for an academic job in literature (was never going to be my scene). As I look ahead, I envision relocating to Los Angeles (although still teaching in SF), and starting my own theater company there. One of the biggest obstacles to moving forward with this was the memory of the backbreaking toil and labor involved in producing Mud in Berlin, and the heartbreak of its less than sparse attendance. However, reading this piece and this piece at Theatre Ideas has given me some encouragement. By keeping my vision right-sized, light and sustainable, there is no reason that the process needs to be wrenching or heartbreaking, or at least not consistently so. It is the same vision that worked so well for me with the class: set meetable goals, and then meet them. It’s a marathon, not a sprint. Invest in people. Remember what’s really important: the passion of the actor, the human capital, and the relationships that keep that capital healthy and motivated.

We usually think of “sustainability” as something that pertains to big industries, but sustainability is a key concern for artists trying to carve out a niche for themselves and create an artistic home. As Will Durant wrote, paraphrasing Aristotle: “We are what we repeatedly do. Excellence, then, is not an act, but a habit.” When we think about what we can repeat, rather than what we might be able to do once, we are creating a future.