“I didn’t want the movie to end” 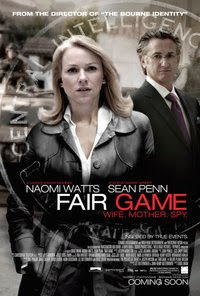 That’s what I heard a woman say as I was leaving the theater after having seen Fair Game, the new movie about the Valerie Plame affair starring Naomi Watts and Sean Penn. I knew exactly what she meant.

The credit for the great pleasure that this movie affords goes to Doug Liman, the director of this film and the successful Bourne trilogy. Such skillful storytelling a rarity; very quickly, it becomes clear that you are in the hands of a master, and you feel totally free to lie back enjoy the ride. And what a ride it is: we get to see the CIA bureaucracy at work, we get to experience the Iraq war from the point of view of the Iraqis, and we get to observe the wrenching effects of the unfolding international scandal on Plame and WIlson’s marriage.

As deft as the storytelling is, I will say that the acting from the two leads does not succeed as admirably. Sean Penn fails utterly to connect with anything other than righteous indignation about his mistreatment at the hands of the Bush administration: there is a notable lack of depth to his attachment to his wife. This becomes painfully clear in the confrontations with his wife: he brings bluster and little else. Watts is understated and serviceable for much of the film. She does a fair amount of what I have previously referred to as “scrunched up face acting”. However, in the climactic scene of the movie she redeems herself and delivers a scene best described as luminous.

It is a testament to Liman’s skill as a director that the less-than-stellar work from Penn and the mostly unremarkable work from Watts do not mar the experience of the film. Many fine performances from the supporting cast also help to make the film the pleasure that it is. In fact, I think it says something about the nature of the “star system” in which Hollywood directors have to work, that the general level of acting among the supporting cast is noticeably higher than that of the two leads *(excepting the one scene mentioned previously, in which Watts is transcendent).

For Hollywood fare, this film is very, very good. And as we as a society consider our next steps in the Middle East, it is a timely reminder of the bad decisions made over the last decade.