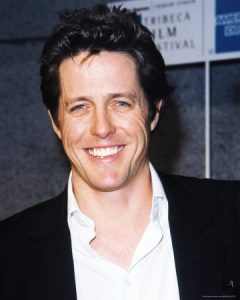 “I personally find going to the theatre is enjoyable about one time in 20”, he told World Entertainment News Network (WENN) last week. “The other 19 you’re just going, ‘Oh, come on. Let’s get to the end of it and have a drink'”

I am not a particularly big fan of Hugh’s, but I think he is right here. A genuinely GREAT evening at the theater, an evening that you like so much that you dread it ending, is exceedingly rare. Most of the time, an evening at the theater involves shifting uncomfortably in your seat, looking at the clock, fanning yourself with the program, watching other people watch the play, assessing the light plot, exchanging looks of bafflement and despair with your companions, and a final dash for the exit.

This malady is uniquely the theater’s. Most people will not have a problem leaving a movie or an art exhibition they dislike. But leaving a play while it is in progress is something many if not most people find to be a tall order. Add to that fact this, from the Guardian theater blogger:

The level of engagement – and fiscal investment – needed for a night at the theatre is often much greater than that demanded by listening to an album, watching a film or reading a book. The frustration caused by having to disengage with it once you’ve realised it’s not your cup of tea – walking out at the interval instead of turning it off or flinging it across the room – is greater still.

It all adds up to a recipe for not going to the theater at all, which is a choice that many people make.

And what is the reason for all these heaping piles of fail? Why is the theater so distinctively, pervasively, ubiquitously boring, excepting the very occasional, very exceptional success? I think there are several possible reasons.

The first, and the one that gets most often overlooked, is that doing theater well is very, very difficult. In particular, acting in theater well is very, very difficult. Acting well enough to sustain the genuine interest of a few hundred people for a period of two hours give or take is very, very difficult. With film and television, the actor only needs to get something right once. Budget permitting, actors in film can attempt a sequence many times, and as long as one of the takes is in the ballpark, all is well. The theater actor needs to be able to repeat something again and again, preserving the integrity of the performance without losing the freshness. In addition, much of the acting that film actors do is in close up, so they are not obligated to remain engaged with their whole bodies at every second of a scene in the way that the theatrical situation requires. Being alive from the neck up is a lot easier than being alive from head to toe. Also, actors in film commonly only need to act for a minute or two at a time, whatever the length of an individual take. Actors in the theater need to be able to stay invested in scenes for much longer stretches than film actors generally do. Further, film editors can and do cover up a multitude of sins. Bad acting can be edited around, and musical underscoring can be used to provide an emotional hit that the actor falls short of supplying. With the theater, as powerful as design and production values can be, a show lives or dies by the acting, assuming a decent script. The actors have to be GOOD ENOUGH to make us, the audience, FORGET OURSELVES and WONDER ABOUT what will happen next TO THEM. No mean feat, to say the least. Everyone has cares of their own to worry about, and an actor has to be very good indeed to get people to suspend their egocentric preoccupations and CARE about what is happening on the stage.

I spoke once with Richard Gilman about the pervasive badness of the theater, and the reasons why we find it so unendurable. He remarked that we find bad theater particularly unendurable because of the real presences involved. When we are watching a bad play, not only is it bad, but there are REAL PEOPLE in front of us engaged in being bad, in failing, in flailing, in sucking, so to speak. At a movie, not so: the people on the screen may be bad, but because they are NOT REALLY there, because they are nothing more than the effect of light projected through moving plastic onto a screen, we can be more at ease with them. The fail is not as relentlessly in our faces as it is in the theater. We feel removed, we feel protected, we feel detached. We seem not to feel as implicated in the failure. We find the failure easier to accept.

The sheer difficulty we become accustomed to if we go to the theater with any regularity, the difficulty of sitting in the real presence of people failing, though, makes the appearance of something that is genuinely good in the theater, something genuinely fresh and compelling over a sustained period of time, a true miracle. As we watch it unfold, we pinch ourselves in disbelief. We expect another shoe to drop. We expect things to fall apart. We feel certain that the center cannot hold, and yet somehow it does. We watch a group of actors give birth to the impossible. Jaded old theater maven that I am, I have left theaters in Vienna, in New York, and in San Francisco with the exuberance of a child, ready to sing hallelujah to the mountain tops like Julie Andrews at the beginning of The Sound of Music. That kind of experience is something most of us had in our childhoods when attending a play, and having had it, we are very, very reluctant to give up on it altogether. So we gird our loins and head once more into the breach, dear friends, once more, knowing what likely awaits us, the ennui, the soul-killing tedium, the desperation for laughter and applause on the part of the performers, but hoping, hoping against hope, that this time might be different. And every once in a while, everyone once in a great while, every once in a blue moon, it is.