We humans are incomplete beings by nature.

We think of there being two types of contributors to the gaping hole.  The first is called a gash.  It is an episode that occurs at a point in time that robs the character of vital stuff and contributes to the gaping hole.  In A Streetcar Named Desire, Blanche DuBois has experienced the loss of the home that has been in her family for generations, Belle Reve.  This is a gash for Blanche.  It’s a devastating loss that contributes to her gaping hole.  The same with the suicide of her husband whom she shamed for being a “degenerate”.  This is a gash that widens her gaping hole.

The other type of contributor to the gaping hole is the tumor. A tumor is a condition that a character lives with over time.  In Streetcar, Stanley Kowalski lives in New Orleans as a second class citizen: he is Polish, and has lived with being seen as a dirty immigrant or the child of immigrants all his life.  This condition of living with this second class citizen status is a tumor; it widens Stanley’s gaping hole.

But it all starts with the gaping hole. 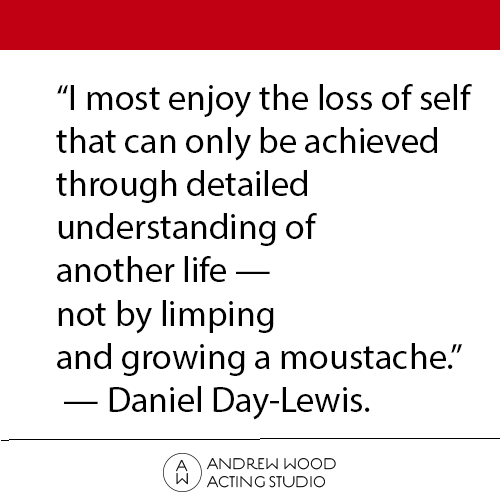 “When are we going to work on creating characters?”

This refrain arises from time to time in the course of my teaching. I might be tempted to reply “What do you think we’re doing?”, as we strive to come to terms with circumstances, need, plot objective, action, and the path. We look at the decisions that a character makes, and the actions that follow from these decisions, as revealing character. So by studying the circumstances in which a character finds herself, some of which are a consequence of her own decisions, we can learn a lot about her character.

But that isn’t what the student is asking. The student who asks about when we are going to work on character is asking about physical characterization, the taking up of various physical and vocal idiosyncrasies that define character in the popular imagination. Darth Vader’s character impresses itself on us in large part through his voice. The temptation, then, is to assume that the main work of the actor is the finding of the right voice, and the consistent application of it across the role. This ability to change one’s vocal and physical demeanor is a kind of miracle to the lay person, and also to the aspiring actor, and indeed, there can be something miraculous about it. But it is not the deepest essence of the actor’s work, to my mind. And that deepest essence should be the basis for such physical and vocal mutations.

END_OF_DOCUMENT_TOKEN_TO_BE_REPLACED

The Actor’s Vow — from Elia Kazan

“The Actor’s Vow” – Elia Kazan
I will take my rightful place on the stage
and I will be myself.
I am not a cosmic orphan.
I have no reason to be timid.
I will respond as I feel;
awkwardly, vulgarly, but respond.
I will have my throat open,
I will have my heart open,
I will be vulnerable.
I may have anything or everything
the world has to offer, but the thing I need most,
and want most, is to be myself.
I will admit rejection, admit pain, admit frustration,
admit even pettiness, admit shame, admit outrage,
admit anything and everything that happens to me.
The best and most human parts of me are those
that I have inhabited and hidden from the world.
I will work on it.
I will raise my voice.
I will be heard.

…becoming a human being.

What does it mean to be a human being? It means someone who can fully participate in the life of a human being. If we can’t, we are not human beings. We wander in some other realms: ghost realms, demon realms, god realms, etc. And what is it to attain our freedom as a human being? People wake up to this question in many different ways. Just the other day someone said to me, “I feel like these days I am growing, expanding, and becoming more of a person than I used to be. But, suddenly I’ve discovered that sometimes I am lonely. I used to feel that I didn’t need anyone. But now I recognize I am lonely, I feel a sense of humiliation about my needs. I feel as though I have become human, and yet I am now longer free and detached from my needs and loneliness.” As Buddha said, becoming human is “no light deal!”

Up in the Air, or, The trouble with “watchable”

For New Year’s Eve, I went with my best friend to see Up in the Air.

The film is worth seeing, firstly because it is a good script, and it is executed well. But as a connoisseur of performances, and a teacher of acting, it was valuable on an entirely different plane.

George Clooney is a (mostly) watchable actor. If you look closely you can detect the occasional false move, a slight hyperactivity in the face, around the eyes. But it’s very slight, and not intrusive enough to be noisome. With a little good will, it can be easily overlooked.

What he is not, however, is a passionate actor. He is the consummate charmer, supplying a steady stream of wryness and happy-go-lucky ease, which, as it happens, is called by the role he plays in this film. However, this is a movie about a playboy who wakes up, and is supposed to have a Wile E. Coyote moment of vertiginous horror when he realizes that the ground beneath his feet is no longer there, in fact was never there to begin with. It’s clearly supposed to be painful. That pain? We can infer it, but we don’t get it. Clooney quite simply lacks the depth, the investment, the deep empathy for the man he is portraying and his dilemma. So while the story is told skillfully enough that we understand what is happening to him, and can even sympathize, we don’t get to feel what he feels.

We do get to feel something, though. And that is mostly due to the radiant work of his co-star, Vera Farmiga. She manifests a genuine fondness for Clooney’s character that is the steady undercurrent of the movie. It is a fondness that knows its limits, to be sure, but it is undeniably there. She manages to offer him empathy, compassion even; she is generously willing to overlook his limitations, which she is quite clear about. The passion and care that she brings to her role make the movie a satisfying experience, regardless of the other assets and liabilities of the film as a whole.

The difference between Farmiga’s performance and Clooney’s provides a perfect opportunity to talk about the trouble with “watchable”. As I stated previously, Clooney is a watchable actor. What does this mean? He refrains from doing anything patently false. He is not overwrought. He does not visibly strain. In his manner of relating to his fellow actors, he does no violence to our sense of truth. We will not wince watching George Clooney.

However, he lacks killer instinct. He does not go for the jugular. He does not play to win. He is not bold. Now, an excess of boldness in the absence of the “truthiness” that he provides, in the absence of the ease, the grace, the savoir faire, the letting-the-action-fit-the-word-and-the-word-the-action would grate. We would recoil from it as “bad” acting, as overacting, as a big pile of fail. One thing we all know about acting is that overacting is bad. Visible strain, exaggeration, and theatrically magnified behavior are to be avoided at all costs. But the naturalness that Clooney delivers, while it may put as at ease and make us feel safe in watching what happens, does nothing to challenge us, to unsettle us, to be Kafka’s axe that breaks up the frozen sea within. It is, in short, underwhelming.

Ms. Farmiga, on the other hand, walks the tightrope of providing BOTH boldness and truth. She can make herself vulnerable without losing her balance, her poise, her responsiveness. She demonstrates what Artaud termed “an affective athleticism”.

One of the many challenges of teaching acting is to induce students to develop in both registers at once. They need to be real and truthful, but they also need to be bold and CARE a lot, as much as they possibly can. Allowing them to develop one of these capacities without simultaneously cultivating the other one is like teaching a piano student to play only with her right hand. When she finally starts to use her left hand, it will be WAY behind the curve.

Boldness and truthfulness need not be opposing variables; in a well-developed talent, they complement and support each other. A sense of what is at stake reinforces the need to respond in a truthful way, and careful attention to the reality of the character’s situation should promote greater care for, and investment in, the character’s reality. However, it is not a given that the two values exist in a synergistic equilibrium; such a dynamic balance is an ideal which must be attained anew, again and again, in every role the actor takes up.