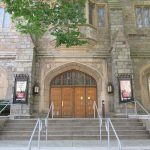 The University Theater at the Yale School of Drama

Andrew Wood founded his acting studio in 2004.  His intention was to create a setting in which to share the extraordinary approach to acting he encountered as an MFA director at the Drama School at Yale.

The approach originates in the work of Stanislavsky, as do most major approaches to acting today.  The approach taught at Andrew Wood has as its hallmarks the revolutionary insights of Yale acting teachers Earle Gister and David Hammond.  The approach was synthesized into its current comprehensive and cohesive from by Evan Yionoulis and Mark Brokaw.  Yionoulis has been one of the principle acting teachers at the  Yale School of Drama for over a decade, and was recently appointed the head of Drama at Julliard.

In the approach,  acting is understood as the process of bringing the actor’s own visceral need for deep connection and significant relationship to bear on a role.

The Advanced Workshop is for students who have familiarized themselves with the approach taught at the Studio and have demonstrated their dedication to their work.  This class gives such students the opportunity to work with Andrew and with each other in a more concentrated way than in the Essentials class. Students generally begin work on the scenes a month before the class starts.  This means that when work is first presented in class, it is in a more developed condition than is possible in the Essentials class. Andrew often partners with Leah Zhang, certified Alexander teacher and MFA actor, for the scene work in the Advanced Workshop. Some Advanced Workshop class cycles focus on contemporary material, others on Shakespeare or Chekhov.

The culture at Andrew Wood Acting Studio emphasizes dedication, commitment, excellence, collegiality, and a love of dramatic writing and the challenge of embodying it.